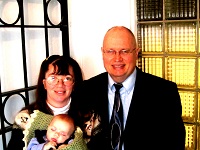 Pastor Methum started out on the pastoral staff at Grandview Park Baptist Church in Des Moines, Iowa after graduating from Faith Baptist Bible College with a B.A. in Pastoral Theology. It was there that had a burden to start a church in a large city and God directed him to Milwaukee, Wisconsin. Pastor Methum, his wife Traecey, and their four children Jacob, Jerub, Racheleah, and Rebekah followed God’s leading and came to Milwaukee. His first wife Traecey went home to be with the Lord in 2010. Since then the Lord has blessed him with a second wife to be his help meet, Cheri, and another child, Ruth Ann. His four children from his first wife are all married off and serving the Lord in other good churches in the Milwaukee area.

The first stop for the church was at 2525 W. National Avenue in a store front in June of 1990. His family of six lived in a two-bedroom apartment at the same address. Services were held there for almost seven years.

After the 800 square foot auditorium was filled, God then led him to purchase a building at 2935 W. Greenfield Avenue. After extensive remodeling, siding, windows, and complete electrical and plumbing upgrades, the church was eventually issued an occupancy permit and started holding services on the first floor in October of 2000. In 2003, they remodeled the basement and second floor, adding a new roof, fellowship hall, kitchen, and Sunday school rooms. After nine years at that location we again outgrew the building.

After much prayer God led us to purchase our current building at 3068 S 13th St in 2009. Again it took much work to get the church to place where we were able to hold services. We still need to get some things finished, but are waiting on God to provide the finances to get it all done.


We look forward to seeing you!


Summer Schedule
Adult Bible Study 8:45 am
Sunday School 9;45 am
Morning Worship Service 11:15 am
Lunch is provided by the church following the morning worship service on the first Sunday of each month